We just adopted a new dog baby! His name is Hermes, he’s about 6 months old, and we adopted him on April 1st. We’re not quite sure what he is, exactly, but it’s likely some sort of terrier mix, possibly with some schnauzer sprinkled in as well? (Look at those eyebrows and the cute little beard…)

He’s such an amazing little thing. I would have written about him sooner, but I honestly just couldn’t put into words how much he means to me. (I was also kind of lazy. Mreh.) If you’re interested in more pictures of him, he has his own Instagram! 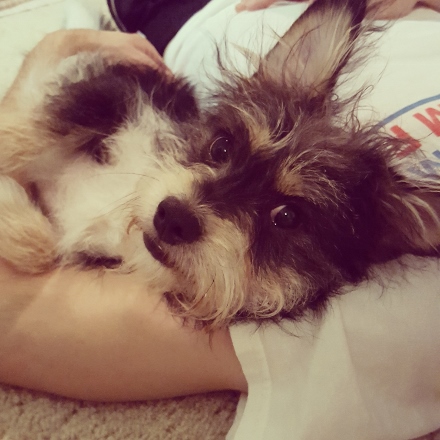 I’ve wanted a dog for quite some time now, but the stars just never really aligned. I either wasn’t financially stable enough for one, didn’t have the time, or lived in a location that didn’t allow them.

I’ve suffered from some pretty bad depression over the years. I’ve had days — weeks, even — where I just couldn’t get out of bed, where I was crying so hard for no absolute reason at all. I’ve been to therapy, I’ve taken medication, and to be completely honest, there was nothing compared to the feeling of holding a dog in your arms. Obviously, it’s different for different people, but I truly believe that pets can be amazing therapy. You have someone who will listen to you, who will play with you, who’ll be happy for you, no matter what. They don’t judge you (though some cats really look like they’re judging you hardcore…) and they really just love you unconditionally. For someone whose biggest fear is that other people are secretly hating me behind my back, the fact that there’s this little being that isn’t hating on me has always been reassuring.

That, and there’s the fact that they’re really darn cute… I mean, seriously. How do you look at a face like that and not want to smile?

When William and I decided to move in together, we discussed dogs. We specifically chose an apartment complex that was dog-friendly, just to keep our options open. It was definitely not a decision we jumped into hastily, though I really wanted to. But we had a lot of talks on the subject, about our personal preferences, what kinds of dogs we wanted, what we didn’t want, and what it would look like.

Finally, we decided we were ready. So we started searching. I grew up with two little dogs: 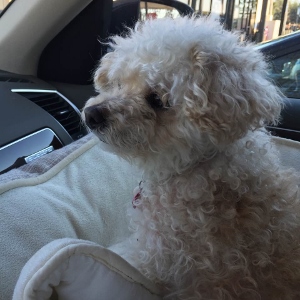 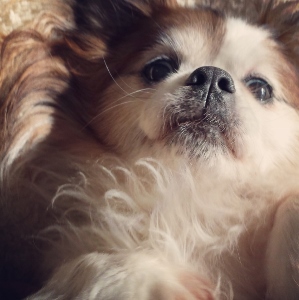 Cookie, the miniature poodle, and Rosie, the shih tzu. So I wanted something similar. Small, preferably hypoallergenic, that’s mostly a lap dog. William, I think, wanted a dog a little bigger and with more energy. We both agreed that we wanted a dog that was a little older, perhaps 1-3 years old, because we weren’t sure we were ready just yet for the responsibilities of a puppy.

And somehow we ended up with Hermes, the 6 month old pup. He’s not exactly what I’d written down on paper, but honestly speaking, I fell in love with him at first sight. He’s just so playful, so full of energy and love, and he’s such a character. He loves to play, and he’s smart enough to have picked up and mastered sit, down, and stay (kind of… mostly…) in about a week! He gets along with other dogs, and he’s even great with little kids.

I’ve never been happier. And if you’re friended with me on any type of social media, you’ve probably been spammed with countless pictures of him. (Seriously, have you ever watched FullMetal Alchemist? I’ve gone full-on Maes Hughes…) I’m so excited to see this little puppy grow and to give him all the love in the world.

Do you have pets of your own? I’d love to hear about them in the comments!

So cute! I want a dog for many of the reasons you listed as well. I’m at home sick today and it would be nice to have a little doggy companion to keep me company.

I am the proud fur-sister of a Cairn Terrier/Poodle mix named Colby. He’s almost 8 years old, and we’ve had him since he was 8 weeks old. I believe I’ve a picture of him on my Instagram – @miss.jessicamezo – if you’d like to see him.

Hermes is so ADORABLES~ I say go watch Full Metal Alchemist Brotherhood. That follows the manga and ultimately has a better storyline. Also HUGHES is adorable, too~

How far are you in it? I have a ESA named Marley, and she’s a 1 year old yellow Labrador and I LOVE her. She’s become a integral part of mine and my husband’s heart. She’s our fur daughter! Congrats~

I’ve read the manga, watched the first anime, and watched Brotherhood, haha. FMA is one of my favorite series ever. I really loved the manga/Brotherhood for the Ishval flashbacks, specifically. But I also really loved the 2003 anime because it gave us more time with Hughes.

Thank you! We just got him three weeks ago, and he’s only 6 months old, so we’ve got such a long road ahead of us, but I’m so super excited about the journey.

Aww, Hermes is adorable! I want a dog now 🙁 I used to be frightened of them but they are so soft and harmless!

6 months? Hermes looks so big for me! I think always a good companion would be a dog or cat to liven up someone.

Right now I don’t have any pets but I would love to get a cat someday… :3

Aww, Hermes is adorable! I’m glad he makes you so happy! My husband and I have been wanting a dog for a while now too, but we need a better tank for our turtles (that a dog would not be able to reach or mess with). I still love our turtles, so I don’t want to give them away. One day, we’ll go forward with adopting a dog!

Awww! What a cutie! I’m glad he’s making you so happy! Hermes is a great name, too! XD Love the Greek myth reference (or is it some other reference XD).

I used to have a bunny, who was my pride and joy. She lived quite a long time, but she passed away 🙁 I miss my bunny, but I hope to have a dog in the future. I wouldn’t mind me a Shiba Inu!