We Adopted a Kitty!

If you follow me on any social media, you probably already know that on August 4th, we adopted a kitten. Her name is Diana (of Themeowscira, named after Wonder Woman, of course) and she was about 12 weeks or so when we got her. A friend of William’s coworker found her and her sister on the side of the road, but since she’s allergic, she had to put both of them up for adoption. (But seriously though, who leaves tiny animals on the side of the road?) At first, we just wanted to meet her and see how Hermes (he’s our dog. I might talk about him a lot on social media…) would feel about her, since he’s never had much interactions with cats before. But really, who were we kidding… we pretty much decided to adopt her before we even met her. 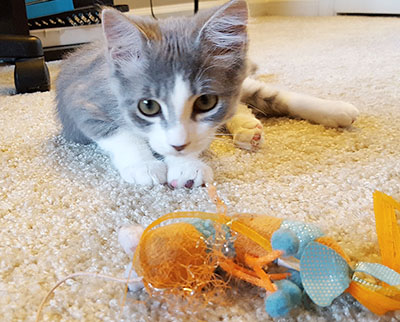 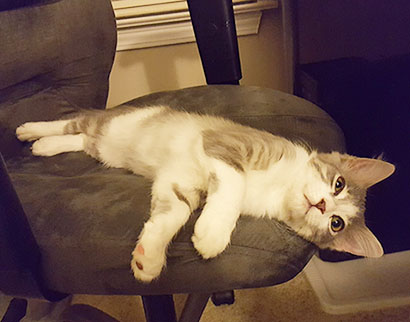 Here she is! Kittens grow at an alarming rate, I’ve learned. We adopted Hermes when he was 6 months old and he’s almost 2 years now, but I honestly haven’t noticed much of a difference (then again, he was 6 months and she’s still only 3 months. If you want to see for yourself, he’s over at @hermestheblur on Instagram, just sayin’ *cough cough*) but she’s growing every day.

I’ve never had a cat before, though, and neither has William. We’ve both always been dog owners, so this was a little foreign to us. Whatever people say about cats being easier pets than dogs… I’m not sure I believe them! At least Hermes couldn’t reach most places and the worst he could do was poop all of the floor. (Gotta say though, litter boxes are such wonderful, wonderful inventions.) It’s been really interesting trying to keep Diana from getting everywhere, chewing on things she’s not supposed to, and waking us up in the middle of the night. Though… she seems to like William more than me, because she keeps sleeping on his chest and waking up at 3 or 4 in the morning to lick his beard. (I’m totally okay with this.) 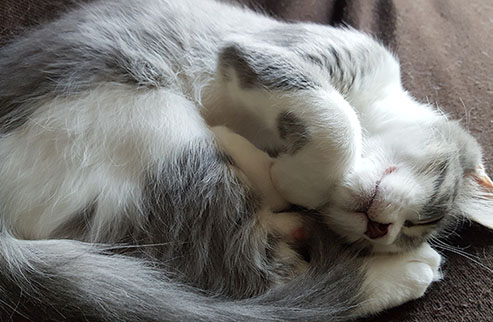 Getting her and Hermes acquainted has been the toughest challenge. If you didn’t know, introducing a cat to a new household is a lot harder than introducing a dog; cats are a lot more territorial than dogs and they’re also not as good with change. Thankfully, since Diana is just a kitten, and the woman who rescued her had dogs of her own, the transition was a little easier. We decked out our guest room for her, and for the first few days she was there, we kept the door to the room closed so she and Hermes couldn’t see each other. William and I would take turns with one of us spending time with the cat and the other with the dog. Hermes, though, hates closed doors. He has a serious case of FOMO and he needs to be able to keep an eye on both of his parents at the same time, so he wasn’t having any of it. I actually had to exit the bedroom one night by pretending I had to go to the bathroom and leaving through that door, because Hermes would have a fit otherwise. Diana, on her part, was also not following the system because she just wanted to get out and explore. If you ever watched the Wonder Woman movie that recently came out (you should, if you haven’t! It was really good!) I now understand how Hippolyta — Wonder Woman’s mom — felt. My life for that whole first week was pretty similar to the opening of that movie: “No Diana, don’t leave this island! The land of Men is dangerous and I’m trying to keep you safe here!”

One of the biggest problems we faced was Hermes’ innate drive to chase. He’s not malicious in any way, but he is 20 lbs and she’s a wee 2 lbs. Her entire head could probably fit inside his mouth. He’s also used to playing with dogs that are way bigger than him, who like to tackle him to the ground and bite at his neck. So even if his intent is not to hurt her, he could seriously injure her accidentally. The funny thing is, bigger dogs love to play rough with Hermes, and it looks and sounds pretty gruesome sometimes, but we’ve never really cared. I guess having owned dogs in the past, it’s pretty easy to know when it’s rough play and when it starts getting dangerous. But with Diana, even (probably) harmless stuff like chasing each other or her swatting at his face makes me cringe a little. For the first week and a half, Hermes was on a leash any time he was in the same room as Diana. He did not enjoy that.

They seem to be getting along a lot better now. It’s been about 3 weeks and they’re allowed to roam around freely when we’re at home. Diana likes to swat at Hermes when he’s just chilling, so he gets forced out of his seat a lot. He also gets yelled at if he tries to chase her (“Leave it” is probably the best command you can ever teach your dog, seriously) and he’s not allowed to chew up her toys, which are reeeeally tempting for him because they’re all fuzzy and pulling the stuffings out of things is his favorite thing to do ever. So life is hard for big brother. But I think he’ll he fine.

Awww! Haha, I’m glad you’re all adjusting to the new family member, Hermes included. I’m allergic to cats too so I’ve never tried having a cat and a dog at the same time either, but it sounds challenging even before hearing details. So many dogs are simply driven to chase anything that moves and that isn’t another dog.

Good luck continuing to get Diana settled and more familiar with the house rules!

I saw you tweeting about blog and I thought I’d check out your website. I really like it. Looks like Vicky has come a long way!

Good job on the social buttons, social media is so powerful these days

You should consider installing an SEO plugin like Yoast or something, theres loads of good free ones.

I also provide a website health check on websites. I give out detailed reports on website performance stats. To learn more, you can visit my service page https://goo.gl/stNKTp

Oh my god look at Hermes and his pouty baby face bawwwwwwww
And no, you clearly haven’t talked about your cat enough 😛

THE KITTY IS ADORABLE!

Yeah, cats and dogs can live together but it is tougher to introduce them to each other but I love the name of the kitten-Diana and yes, I followed Hermes by using my own account: Mellow_yellow_marley, my ESA. Talk more about your fur babies, fur momma!

Cats are definitely easier than dogs if they know to poop in the litter box and not make a mess, haha. My boyfriend and I slept with a cat during our vacation and the cat loves him more. Hermes is a cute pop! Hope they both can play nice and Hermes doesn’t hurt Diana in any way!

Aww, both Diana and Hermes are so cute! I’m glad you adopted Diana after she was left on the road. I seriously don’t understand people who do that kind of thing to animals. She’s lucky to have you!

I’ve never had a cat or dog, but I’ve pet-sat both. I agree with you on cats! We always had issues with the cat getting into things, while the dogs either couldn’t reach things or didn’t care.

I hope Diana and Hermes become more accustomed to each other soon and become good friends!

Hope Diana is settling in well! It’s so cool that you named her after Wonder Woman! I’d definitely do something like that if I ever got a pet. Hope Hermes is adjusting to having her around. I imagine that’s such a difficult situation!

I loved the Wonder Woman movie. I’m hoping Justice League works just as well, but I don’t know what it’ll be like when all the characters get together. Hopefully it’ll work!

OMG sooo cute!!! Both of your animals. ♥ I use to have three cats, but over time one died from old age and complications. One of them ran away when we moved, I guess she was confused and the other I had to give to someone else because my place didn’t allows pets. I haven’t had the hear to get any new pets yet. I love seeing pictures of cats, and yeah, they are not really easier than dogs. I agree with that, especially if you want to train them to stay off of tables and so on so forth. I guess it all depends on what you see as hard, haha.

Oooooh! Your new kitty is so cute! I never had a cat, but I wish I could have one. My allergies to them are severe, though, so nope 🙁 I’ll stick with dogs. I hope to have one in the future.

It sounds like a challenge getting the two of them acquainted! And poor Hermes for having to be leashed for a while. I’m sure he hated it! But it’s good they are getting used to each other XD I can so see Diana pestering Hermes as a younger sibling will do, haha!

Awww, Diana is so adorable. I am glad to hear that the family is starting to get comfortable with each other! Kittens do grow very fast! One minute they are small and the next they are big.