I recently received a Keurig K15 Coffee Maker along with a cup carousel, reusable K-Cup and Green Mountain coffee (in Breakfast Blend and Caramel Vanilla Cream) as well as a box of Celestial Tea cups (in English Breakfast) from Influenster to test out!

Ironically, over the past two months, I’ve actually been trying to wean myself off of coffee and onto drinking tea only. My morning routine consists usually of cereal and brewing a cup of Earl Grey tea with cream and sugar. But who am I to say no to a shiny Keurig machine? I’ve always wanted a Keurig, ever since working at Starbucks when they rolled out their Verismo machines. (Getting instant lattes is really cool and all, but those machines were so hard to figure out…)

I’m told that non-coffee options do exist for K-Cups, like the breakfast tea blend that was included in my VoxBox, and also things like apple cider and hot chocolate. Now, I’m incredibly excited about the possibility of instant apple cider at my fingertips, but as far as brewing tea with a K-Cup… I’m questioning the quality. Tea has a pretty strict brewing process (amount of time, temperature, how much tea, how much water… those are all important factors) and I’m skeptical that a machine that’s intended for instant production could produce quality tea. But… we’ll see!

I should preface this with: I’m not a morning person. My ideal morning consists of waking up early enough for a run, to cook breakfast, and drink an entire cup of tea. Unfortunately, my actual mornings usually look pretty different. I’m lucky if I can roll out of bed with enough time to pour myself a bowl of cereal and make a cup of tea (to drink at work.) So… yeah, anything to make this process less time consuming? Godsend. 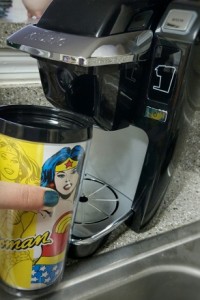 It’s pretty compact, and thankfully fit wonderfully into my small-and-already-stuffed-to-the-brim-with-stuff kitchen. However, it was so small and compact that it didn’t fit any of my tumblers. Sadly, I’m a slow drinker and I can’t actually finish a cup of coffee at home, so I usually brew tea/coffee into my tumbler and take it with me to work. Now, I brew into a mug, and then pour into a tumbler. One extra step, but I suppose considering the time saved in scooping out the right amount, brewing, etc., it’s not a horrible extra step to take.

The system itself was really easy to use! I’d accidentally packed the instructions away before reading them and stuffed them in the topmost section of the Closet That We Don’t Go Into (because it’s where I hoard everything…) but everything was so intuitive that I didn’t actually need them! It even has a handy little light-up indicator that tells you what step you’re on. There’s really only three steps, so it’s hard to mess up. (Pour in the amount of water you want from 6oz, 8oz, or 10oz > place a pod in > hit brew!) 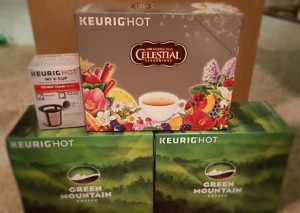 I ventured out into the tea on my third day… Now, English Breakfast is probably my second go-to as far as teas are concerned, so I already have pretty high expectations and standards. And the k-cups… just didn’t stack up. It smelled great, but tasted more like water that had a hint of English Breakfast flavoring to it. Not exactly the kick you want to get you up and ready in the morning. Sad, but… I expected that.

Overall? I’m pretty excited about this machine. Not so great for teas, but pretty awesome for coffee. I’ll probably shop around and test out some coffees until I find one that I like more, and stick to that in the mornings. I’m also thinking of using this for brewing just plain ol’ hot water for when I want to drink my teas :). (And apple cider? Have I mentioned that I’ve heard there are apple cider k-cups out there???)

I’d definitely recommend it if you’re looking for something super simple to make your mornings just a little bit easier. 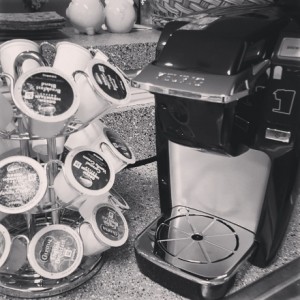 One thought on “Review: Keurig K15”

Maybe for teas, you need to set it to the lowest cup possible to get the highest steeping? Haha. Glad you got a new toy out of this interwebs. 😉