I attended my first Hackathon this past weekend, organized and hosted by the amazing Women Who Code. It will probably be remembered as one of the best experiences I’ve had. Ever. I learned so much, I met so many amazing people, and I gained a great deal of confidence, and I made some wonderful, talented, incredibly inspiring friends. I am definitely going to attend more hackathons in the future, and I recommend that you guys do too! (For those of you who don’t know what a hackathon is, I’ll go ahead and take the description off the Women Who Code Hackathon’s website: A Hackathon is an event in which computer programmers and others involved in software development, including graphic designers, interface designers and project managers, collaborate intensively on software projects.)

I honestly had no idea what to expect, going in. I got my ticket in August, and pretty much spent all of September an anxious wreck. What if I couldn’t find a team to work with? What if I found a team, but had nothing to contribute because I was too junior?

The night before the hackathon, I thought to myself, what if I pitched an idea? I’d played around with the idea of creating a meal prep app before, and I’d thought about how it would be functional and what I would use to code it, but I hadn’t actually gotten anything together. It’d be really cool if I could work on it with other people. Especially since I wasn’t sure I had enough knowledge to accomplish everything I wanted all by myself. Plus, if I’m the one that’s pitching the idea, then I could ensure that I would have a team! (Seriously. I wish I could say this journey started out as some great passion of mine that I wanted to share with the masses, but if we’re being honest here… it was mostly motivated by the fact that I wanted to not be left out.)

An hour before the hackathon, I realized that there was a chance nobody would like my pitch. Cue some serious freaking out here.

(Are we noticing a pattern? Vicky likes to overthink everything.)

It seemed as though a lot of others had the same anxiety I felt, because people were slow to trickle up to the front to pitch their ideas. Maybe it was that solidarity that I felt, or maybe it was feeling like I had more of a chance if fewer people pitched ideas, but I managed to push myself up to the front. I was 4th in line to pitch. And my idea was surprisingly well received. I got many stickers of approval (each person had 3 stickers they could use to “vote” for their top 3 pitches) and ended up with a team of 5 other ladies. 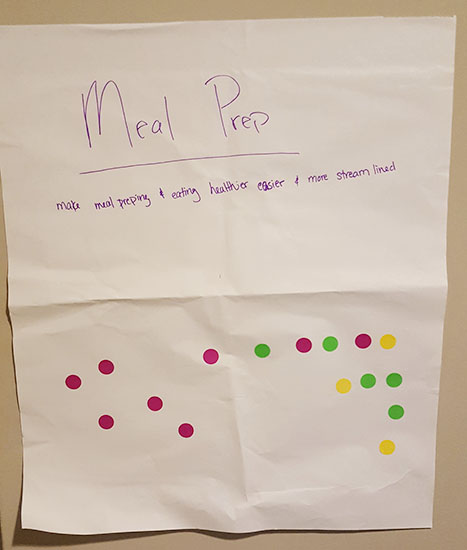 Where it all began…

My team was pretty diverse. UX designer, software engineer, bootcamp student. Some of us had 10 years of experience in certain areas, and others were just starting out. But everyone was excited about the idea. What started out as, “well that’d be cool, I guess, if it were made” turned into something I was genuinely excited and passionate about. Looking back, everyone seemed to just gel together right from the get-go. There wasn’t any bickering, nobody talked over anyone else, it was just a group of 6 women, excitedly sharing ideas and collaborating.

Friday.
We only had about an hour and a half on Friday, so we spent most of it just mapping out a very general idea of what we wanted, and then spent about 45 minutes throwing out ideas for names.

Saturday.
In the morning, we fleshed out our ideas more. We decided to work on 3 main components: a landing page that gives a basic overview of what we are and what we’re hoping to accomplish, a new user interface which was a cute little quiz that new users could take to get some sample recipes, and the calendar, which was the main meal prep interface, where you could drag meals into a calendar and plan out your week (or month.)

After lunch, we divided up into groups to work on each of the 3 areas. I ended up working on the calendar. We found a pretty basic Bootstrap template to start off, and then me and one other lady began customizing it. The calendar was coded in Angular and we used a JSON file to store the recipes. I’d never worked with either, so there was a lot of googling. This was also the first time I’d collaborated with others! Up until this point, me using Git was mostly just record keeping. Now, I had to learn how to use Git and GitHub in reference to collaboration with others. 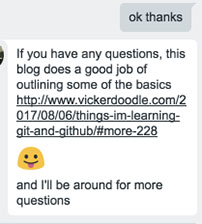 Me messaging my boyfriend about Git. What a jokester.

Thankfully, there were plenty of mentors available to help. And my partner was absolutely fantastic. She was the real MVP when it came to Angular; I was just her helper. We created a recipe list that we could drag and drop into a calendar. The really cool part is, she coded it so that each recipe could drop into a certain amount of days, depending on serving size! (So a recipe that makes 4 servings would span 4 days. How cool is that?) Considering how the hackathon was all of Saturday and half of Sunday, I wasn’t sure if we’d have time to accomplish everything we set out to do, but everything came together quite well. We even had some time after dinner to take a stroll around the building, to both get fresh air and also to discuss a name for the app.

Sunday.
Sunday morning was mostly wrapping things up. We had to finish a few features that didn’t get done the night before, and we also tried to merge all our pages into one cohesive theme. There was a lot of tweaking minor HTML and CSS. (There was also a whole lot of cussing at footers. Seriously. Fucking footers, man. Why don’t they just stay at the bottom of the page?) And then came the actual presentation. I was one of 3 to present our product. Looking back, I’m surprised I volunteered, seeing as I’m terrified of speaking in front of others. I did panic quite a bit in the hours leading up to our presentation, but I was really proud of what we’d created. I was so proud of us that I wanted to go up there and talk about what we’d done.

Here are some previews of our presentation and product: 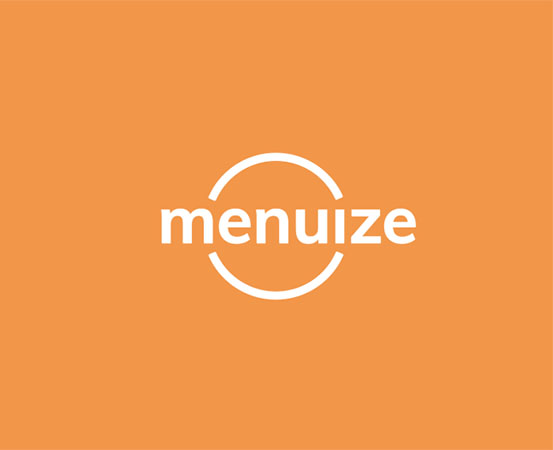 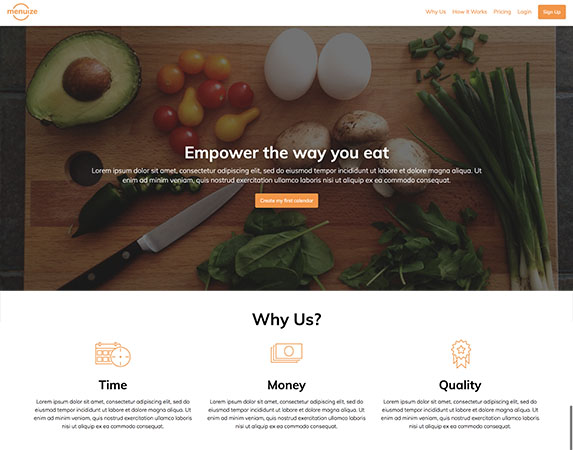 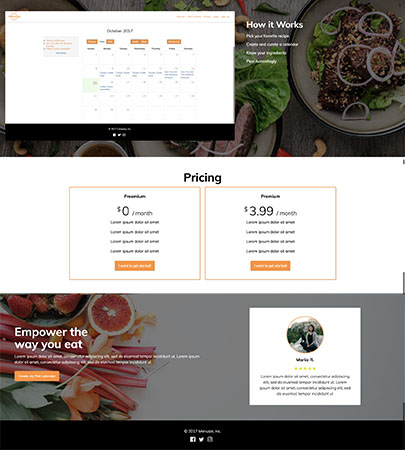 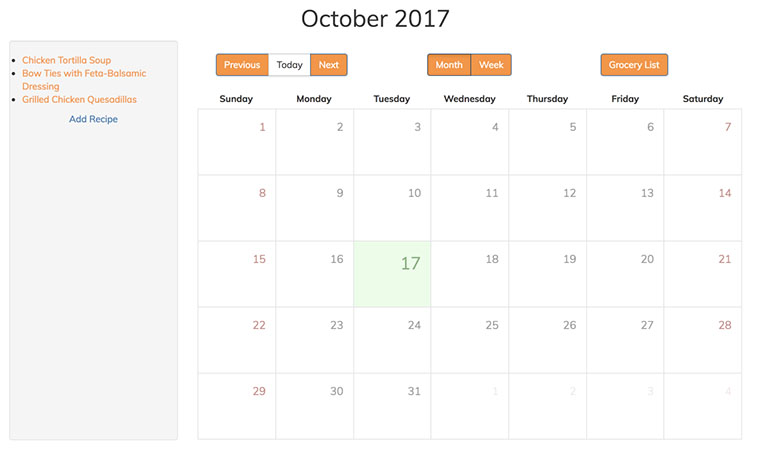 We didn’t win any prizes (though I did win a raffle for a pair of GitLab socks, which are going to William because I don’t wear socks, and I really want to add to his collection of cool socks.) But I’m so fiercely proud of us anyways. We were judged based on several things, and technology happened to only be 25% of the criteria, but we really came through with our prototype and our demonstration kicked ass. (It works! Kind of. Mostly!)

The hackathon was a little more entrepreneur-centered that I anticipated. It was really all about the most viable product to put out into a market (the four judging categories were: customer/market, viability, business creativity, and technology) and the first prize was a chance to pitch the idea to an actual tech incubator. We had amazing developers and designers, but none of us were business-minded, and all of us came to code. So while we were fantastic when it came to executing technology and creating something unique, we ultimately lacked in the marketing and business aspect of our presentation.

But as far as personal goals for the hackathon, we achieved ours. All but one of us had never been to a hackathon before, we didn’t have a lot of experience with code, and yet we came together in a day and a half to create something amazing. I was pushed out of my comfort zone, and it ended up being one of the best things to have happened to me. It cemented in me that this is my passion and this is what I want to do. And I met some absolutely amazing women who are now my inspirations and my heroes.

6 thoughts on “My First Hackathon”

I smell a huge success here.

I’m so glad you had a great time! The app screenshots you attached look awesome, and it’s a great idea that a lot of people would be able to use. Good for you for pushing through the anxiety and stepping out of your comfort zone– that’s not easy and it shows great personal growth to be able to do it anyway. Very proud of and happy for you ♥

I really enjoyed reading about your first hackathon. It was actually a goal of mine this year to attend a hackathon and get involved with the organisation of it a bit more. I attended my first hackathon back in April (http://pawlean.com/2017/04/30/april-for-me/) and really took a lot out of it! I love the sound of this hackathon, it’s really empowering to be part of such an inspiring and welcoming community like Women Who Code.

Well done on going for the plunge and stepping out of your comfort zone as well as building and sharing!!

That’s so awesome you attended you first hackathon and you had a good experience. Here’s to many more hackathons in the near future!

Yay, I’m so glad you did a hackathon and enjoyed it so much! I’ve only done hackathons within my company, but every time was such a good experience. Go you for pitching an idea and also presenting it afterwards! I really like the idea of a meal prep app, and if I were there, I’d totally want to work on it too. I think that’s great that you got along well with your team because that leads to more productive work.

That’s too bad you didn’t win any prizes, but I think your team got a lot done in the short amount of time. It looks great!

If there was a Nobel prize for the couple with the best smile you guys would win.